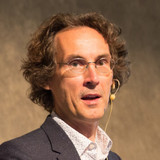 Gregor helps IT and business leaders rethink their IT strategy to maximize the positive impact of their cloud journey. That means, he believes, unlearning current assumptions and freeing an organization’s operating model from past constraints that modern technology can reduce or eliminate. That’s why he encourages IT and business leaders to be in close touch with their “IT engine room” to understand how technical decisions impact future business success.

A major part of Gregor’s career has been spent on large-scale IT initiatives, including migrating on-premises data centers to the cloud, at Allianz and the Government of Singapore. His diverse roles—start-up co-founder, consultant, software engineer, trainer, chief architect, and CxO advisor—have allowed him to see IT from almost every angle. He often draws on that background when advising customers, as he’s faced many of the same challenges that they’re dealing with.

Gregor is the author of several best-selling books on IT architecture and cloud strategy and is an active member of the IEEE Software advisory board. He holds two Master’s degrees from Stanford University and currently serves on the International Technology Advisory Panel of the Monetary Authority of Singapore. After having lived and worked on three continents, he doesn’t think he’s quite done exploring yet.

I made everything loosely coupled. Does my app fall apart?
Gregor Hohpe
Thursday Sep 1, 09:00